This morning, BBC Radio Shropshire broadcast two interviews on the controversy. In the first, Tracey Huffer and I are interviewed by Genevieve Tudor. Listen here. In the second, Daphne Jones presents the case for the Friends of Whitcliffe Common. Listen here. There has been a lively discussion on whether the trees should be felled or not on the BBC Radio Shropshire Facebook page.

There is a row going on between those who favour felling healthy oak trees on Whitcliffe Common and others, including myself, who find the idea of taking a chainsaw to trees just to improve the view abhorrent.

Last night, Ludlow Town Council voted to object to the proposals to fell two oak trees on Whitcliffe Common. That was the right decision and one I fully support. These trees should be preserved. The managers of the common want the trees cut down and coppiced to improve views towards the historic town. I don’t think this is sufficient justification. Axing good quality oak trees is the unacceptable face of environmentalism.

These trees are in a conservation area. They do not themselves have tree preservation orders. They have general protection under which the applicant has to give Shropshire Council six weeks’ notice of any felling or other works. Permission is automatically granted unless the council issues a tree protection order (see planning guidance).

Some of the trees that the Trust and Friends want to fell are unsafe. There can be no argument that this work must be done as soon as is practical. Other trees obscure the view towards town but are trees of little merit. The contention with this proposal are two oak trees, which the Trust and Friends say are obscuring view of the historic town centre of Ludlow. 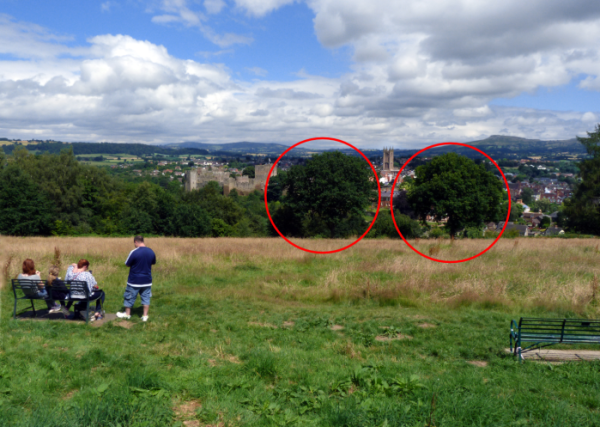 View from the car park

One of the objectives of the Friends of Whitcliffe Common is to: “Open up and maintain the views overlooking Ludlow.” This is a laudable aim but it has to be balanced with ecology and the intrinsic beauty of the trees that are threatened. The Friends and the Wildlife Trust are concerned to maintain views from the car park on the Whitcliffe and from the toposcope. Again, the aim is laudable, especially if this facilitates viewing by people with limited mobility (though neither party to this application makes this point).

Peter Norman is the town council’s honorary tree consultant. He reported to the meeting last night:

My conclusion is that felling of these two oaks should be prevented by imposition of a Tree Preservation Order. This conclusion is based on the following principal considerations:

I think Norman has this right. There is no case for felling these trees. The objective to maintain views from the common should not lead to the loss of healthy trees. I have objected to the proposal to fell trees 8 and 9 but, in common with the town council, I do not object to plans to cut down other trees.

At the time of writing, the proposal to fell the two oak trees has received 23 objections (16/03003/TCA). The deadline for comments is 9 August and Shropshire Council must make a decision by 16 August. If no decision is made permission to fell the trees is deemed to have been granted.

[1]. The Wildlife Trust has submitted two applications to fell trees in a conservation area: 16/03003/TCA and 16/02980/TCA. The latter application uses a different plan and different numbers to identify trees. This is not helpful. I read it correctly, and the documentation is far from clear, the Wildlife Trust proposes felling an additional Rowan under 16/02980/TCA (T23) because it is a “tree declining with general evidence of rot.”