In a guest post, Shropshire’s MYPs Laura Sheldon and Rhys Hart talk about their days in the House of Commons, how civilised it was compared to bear pit of debates by mainstream MPs, but how difficult it can be to get to speak on your first day in the House. The debate was not just a talking shop. Motions were selected for support over the next year. And Health Minister Norman Lamb invited those involved in the mental health motion, including our Shropshire MYPs, to the Department of Health to discuss their concerns and how young people can help tackle mental health issues.

It was pitch black outside when my alarm went off on Friday 14 November, writes Laura.  3.30am isn’t exactly bright and early. It’s just early. A taxi was picking me up at 4.45 and I needed time to wake up, eat and get ready for one of the most exciting days of my life. I was off to the House of Commons to debate issues voted for by over 800,000 young people from across the UK, including over 7,500 from Shropshire alone, in the UK Youth Parliament (UKYP) ‘Make Your Mark’ campaign.

Laura at the Houses of Parliament

The beauty of the UKYP is that we’re all so different and represent more young people than MPs do the electorate. I couldn’t tell you the exact figures but I would estimate the gender ratio as 50:50, and Members of Youth Parliament (MYPs) come from all sorts of walks of life, education, family and ethnicity. If only the body of MPs reflected this. The 5 topics of debate were:

Weeks before the event, I had a clear idea of the motions I wanted to speak on and what I was going to vote for to become the UKYP’s national campaigns for 2015. However, I could have easily been swayed. Everyone who spoke in the chamber spoke with so much passion and determination that, by the end of the day, I was so in awe and moved that I wasn’t completely disheartened with my failed attempts to speak. It’s my own fault – I’m short.

Mental Health is part of my manifesto, so I was always dedicated to vote for the improvement of mental health services for young people – it is also a subject very close to my heart. I also voted for ‘Votes at 16’, but I have lots of concerns about the success of the motion. I believe political education in secondary schools needs to be improved before we can lobby and persuade MPs to consider lowering the voting age.

Rhys Hart, my fellow MYP for Shropshire, has described his experience:

“Only one person per region was able speak on each motion and I was lucky enough to speak on behalf of the West Midlands – I had the amazing opportunity to speak in favour of the Mental Health motion. The privilege of speaking not just for Shropshire but for the West Midlands was the most humbling reward for my past years of work as an MYP. If there is anyone who believes young people are disengaged, rude, dangerous, unintelligent, I tell you now, they are wrong. I challenge them to watch the debate and hear some of the most heart touching speeches I have ever heard; that House has never been filled with more passion, hope or honesty. I further challenge MPs to behave in the manor that we did when we sat upon those green benches.”

The winning motions were:

Both issues ranked amongst the Top 5 issues for young people in both Ludlow and Shropshire in the ‘Make Your Mark’ campaign. Rhys and I tried our best to represent the young people of our county and towns, and reflect the needs of our constituents and we really hope we achieved this.

I’ll make sure Andy keeps you updated with upcoming campaigns. In the meantime, please visit our twitter account for Time to Talk to find out more about my personal mental health project and how to get involved.

Speaker John Bercow MP said during the debate that he loved the passionate way that young people were debating issues such as mental health. I agree. All the debates are well worth listening to. The mental health debate is particularly passionate. At the beginning of that debate, Bercow said that he had received a letter from Norman Lamb, Minister of State for Care and Support. Lamb said he wished to meet those involved in the mental health motion at the Department of Health to discuss the problems young people have and how they can help tackle them. That’s a result. 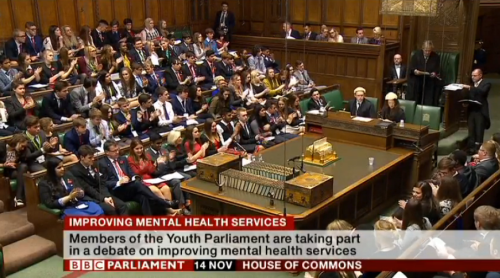 As we romp into the 20s, here are my New Year predictions – an asteroid on steroids and Adrian Mole becomes prime minister