Shropshire Housing Group has applied for planning permission to extend Ludlow’s Foyer (16/00761/FUL). The plans involve demolishing Harvest House and building a new wing to the existing Marston’s Mill building. The extension will be clad in weathered copper shingles. A new reception area will be built on the railway side between the two wings.

Marston’s Mill is home to Ludlow Foyer, a housing project that provides accommodation for up to 15 young people young people aged 16-25. To reside in the Foyer, young people need to commit to training, education and employment. The new building will provide 11 additional residential units.

The development provides three two bedroom apartments at ground floor level, each with a front door to Portcullis Lane. One unit will have facilities specifically focussed towards the needs of wheelchair users. There will be two floors of three apartments above the ground floor, with a further two apartments on a fourth storey below the eaves. Each apartment will have two beds, allowing for sharing or families. 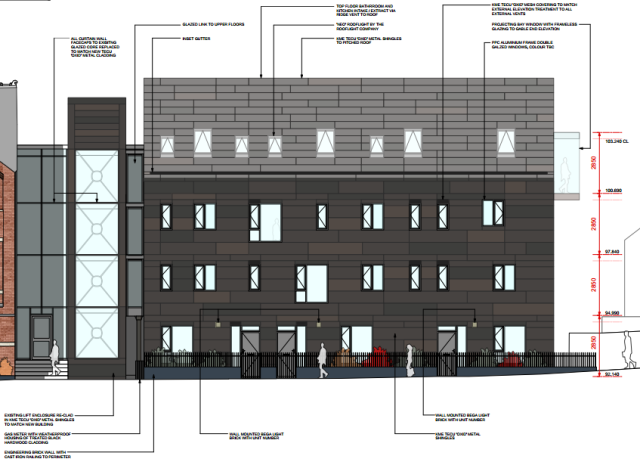 The Marston’s Mill and the new wing will be served by existing lift. The glazed tower for the lift will be reclad in weathered copper shingles. The current curved roof will be replaced with a flat roof more in keeping with the historic character of the site.

The Foyer café will be branded the Granary Café. It will retain a separate entrance on the railway side.

The original design for this development was a historic pastiche of Marston’s Mill. It never looked right. Several alternative designs were examined before the current scheme was chosen. There is a perpetual debate over whether new developments in historic settings should be in the existing vernacular style or entirely modern. Some developments, such as Stone House, have opted for historic pastiche. Marston’s Mill is a former industrial landscape, currently dominated by supermarkets and car parks. In this context, a modern scheme is far preferable (and that is what I would have preferred for Stone House).

This is how the architects describe the design:

The overall language and form of the new buildings is simple and legible. The intention is to create a single integrated form that retains a relationship to the historic building and context. The new residential building in particular develops an architectural language that is stripped down to its basic elements. The result is a kind of gestalt with multiple references to industrial or agricultural form and materials, and also to the historic building itself, such as the glazed bay to the gable end and the proportions of the window openings.

I think they mean the new design fits well in the context.

This is a landmark development of vital importance for young people. We have a growing need for accommodation for young people who haven’t had the best start in life. The Foyer has an outstanding track record in training and getting people into jobs. This plan will nearly double the capacity of the Foyer and it has widespread support across Ludlow.

This is also one of the most important planning applications in Ludlow for years. I am very pleased that South Shropshire Housing has come up with an exhilarating design for this sensitive site. This scheme will greatly improve the rather rundown area at the bottom of Portcullis Lane.

There is widespread support for this project. The designs have been discussed with Ludlow Town Council, the Ludlow Conservation Area Advisory Committee and unitary councillors. We all support it. Notwithstanding my objections to the proposed advertising (below), I will not be calling this scheme in to be decided by the South Planning Committee.

I have one caveat about the scheme.

The current plan is to install internally illuminated signage advertising “Marston’s Hub” and “The Granary Café”. The orange lettering will protrude from by about 30cm from the wall. I think this is garish. It is out of character with the historic Marston’s building and inappropriate on the edge of a conservation area in a historic town centre.

The architects are also planning to fill the glass stairwell with a jumble of lettering spelling out “Marston’s Hub”. This is not as obtrusive as the illuminated orange lettering but it still distracts from the elegance of the overall scheme.

I hope that the architects will look again at this aspect of the design and come up with something more discreet.

The advertising is subject to a separate planning application, so the overall scheme will not stand or fall on any objections to the signage (16/01172/ADV).

Why are these homes empty asks Tracey Huffer?

New plans for three homes at Linney House should go ahead