The prospect of 40 new retirement apartments at Stone House has caused some consternation. Several people have commented that we should be concentrating on homes for young people, not increasing the retired population in the town. I have commented on this in a recent post.

We know that Ludlow’s population is older than average but what are the trends?

Over the last decade, Ludlow has become older at a slightly faster rate than Shropshire as a whole and at a much faster rate than all of England. New projections from the Office of National Statistics suggest that one-third of Shropshire residents will be aged 65 or over by 2039.[1] In some areas of Ludlow, more than a third of the population is already of this age. If current trends continue, 40% of Ludlow will be elderly by 2039.

The big question is does this matter? Should our town and county grow old gracefully or should we develop policies to encourage younger people to live and work here?

Where are we now?

Where are we heading? The graphs below show that Shropshire’s older population is set to grow over the next twenty or so years. The younger population is going to plummet. 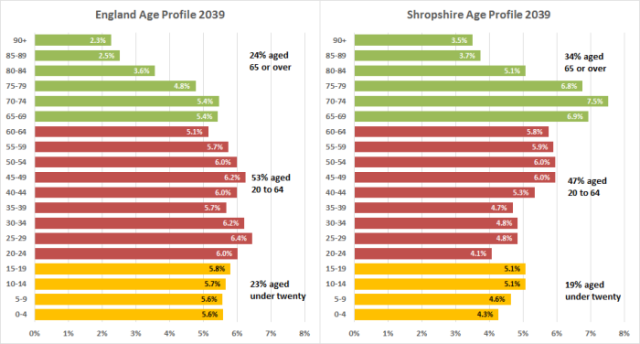 Are we glad to be grey?

The reasons for our local trend to an older population are varied. We have a paucity of higher education provision.[3] Young people need to work in bigger and dynamic job markets. They crave the adventures of cities and of nightlife. They want to get away from home. They struggle to find affordable housing. These factors and many others play a part in the desire of young people to leave our county.

Our county is attractive to older people. It is beautiful. People are friendly. It has a slower pace of life. Housing is cheaper than in many parts of England, especially the South East, so people can release capital when they retire here.

The older people in this county and our town provide a wealth of experience and huge energies that they plough into volunteering, fund raising for charities and a huge range of worthwhile projects. I think Ludlow is a success story for getting old actively. We don’t feel like a retirement town because so much happens here.

But we still can’t duck the question of whether getting older is good for the long-term health of our town and county.

Adult social care is one of the fastest growing items in Shropshire Council’s budget. By 2020, the council will be reliant on two main funding streams, council tax and business rates, for nearly all of its income. We’ve not been that good at creating new businesses around here. We would have another 1,300 businesses in Shropshire if we’d matched the 1.1% growth since 2009 seen in the ten counties most similar to us.[4] If, by 2020, we don’t have a lot more businesses paying rates, then council tax will need to shoot through the roof.

Housing for young people is mostly ignored in the national rulebook for planning, the National Planning Policy Framework.[5] Shropshire Council’s core strategy recognises the need: “In Shropshire, we need to plan for the needs of a growing but ageing population, and encourage more young people to remain in, or move to, the area.” But the core strategy and SAMDev lack specific policies to ensure that young people get the housing they need.[6] Ludlow’s town plan champions support for young people but does not refer to housing.[7]

Do we need to address the stark reality that Ludlow is getting older fast? Or should we just be glad to be grey?

There are big differences between the three unitary council wards that cover Ludlow.

Percentage of population aged 65 or over[9]

Percentage of population aged 65 or over

[1]. Office of National Statistics: Subnational population projections – 2014-based projections. The data are projections, not predictions. The ONS has taken forward current trends to 2039. The further away the projections are from the present, the less reliable they will be.

[4]. The number of enterprises in Shropshire fell by 0.3% between 2009 and 2014 from 13,020 to 12,790. Across our ten statistical neighbours, enterprises grew by 1.1%. Enterprises in largely rural districts grew by 2.0%. Source: Office of National Statistics business demography.

[5]. Paragraph 50 of the NPPF exhorts planners to “plan for a mix of housing based on current and future demographic trends, market trends and the needs of different groups in the community (such as, but not limited to, families with children, older people, people with disabilities, service families and people wishing to build their own homes).”

[6]. There are several references to the needs of young people in the core strategy but no specific planning policies to ensure that they have adequate housing. SAMDev refers to the need for housing for young people in Knockin, Llanyblodwel, Selattyn and other settlements, but not for elsewhere, including Ludlow.

[8]. In this article, the statistics for Ludlow are the combined data for the three unitary wards: Ludlow East, Ludlow North and Ludlow South. The North and South Wards extend beyond the town boundary into surrounding parishes.

Travel guru Simon Calder shouts out for Ludlow and Shropshire